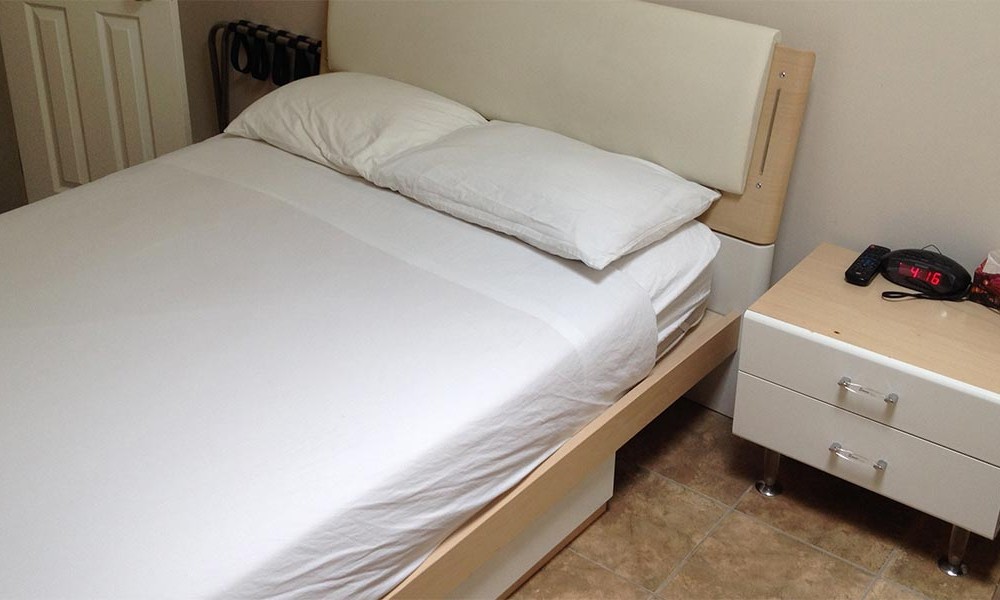 Just before a recent trip to Toronto, I found out that I couldn’t stay at my friend’s condo for reasons beyond his control. I scrambled to find a cheap place for my overnight stay in the city and came across Urban Living Suites (787 Dundas Street West, Toronto, ON M6J 1V2) on a booking engine website. The price was right and I figured I’d give this place a shot.

Here’s what I discovered about the hotel.

The first thing you will notice about this hotel, or actually not notice, is the sign. There isn’t one. I took a taxi from Union Station (I arrived by train from Montreal) and the cab driver left me off in front of what we both hoped was the hotel. Luckily, I was in the right place, even though the office was not quite at the correct address (you have to check in at one door then go to your room through another door).

There seems to be ongoing construction and renovation on the building. It’s a family run business and they update the building as they make money. That’s just my guess. I don’t know for sure. In any case, it’s mainly the outside facade that is being worked on at this point. 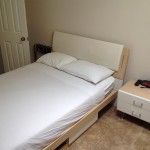 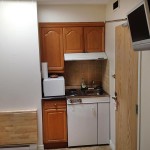 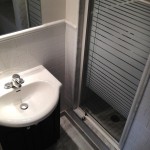 The location itself is actually very good if you want to visit the downtown Toronto area and feel comfortable walking around.

The hotel is located at the corner of Dundas Street and Markham Street. It’s near many restaurants, a large park (Alexandra Park), retail stores, a library, and a residential area. It’s fairly close to Little Italy and the Trinity-Bellwoods neighbourhood. It’s about a 10-15 minute walk to Chinatown. There’s public transportation nearby which is enough for most tourists staying here.

The neighbourhood is being gentrified and the value of this location and property will likely increase rapidly in the near future.

Urban Living Suites is an old apartment building that was converted into a hotel. As you walk down the hall, you get the feeling of a modernized old building in the sense that it looks nice but the hallways are narrow.

My room was a tight fit. It was ideal for one person (or possibly two if you squeezed them in).

To get to the bathroom, you have to walk down a couple of stairs. That doesn’t bother me but I know some people wouldn’t like it. The bathroom is made up of white marble tiles. Like the bedroom part of the room, it’s a tight fit but acceptable.

The room had a skylight which was pretty cool but then the morning sun brightened the room and I couldn’t sleep. The TV was a small one bolted high on the wall.

There’s a “kitchen” table that you lift up off the wall (see my photo). There’s a small kitchenette. Just enough room to make something simple.

There was nowhere to put luggage or clothes. I actually suggested a spot in the room to place some shelves which would greatly improve the room.

It was a warm day in Toronto and the room was hot. I went down to the front desk to inquire about air conditioning. It turns out that heating and cooling of the entire hotel comes from one central source so you cannot control it from the room. Well, my room was unreasonably hot and I wanted it cooler. They said the air conditioner would kick in and if one of the other guests returned a fan, they would lend it to me for the night. The room cooled off a bit for an hour or so. I went out and when I returned, it was hot again. It was difficult to sleep because it was so hot.

When I checked out, I mentioned that the air conditioner was turned on for a very short period of time and that the room was really hot. As friendly as they were, they didn’t really seem to care.

When I checked-in, I actually ended up having a long detailed discussion about the hotel with the owner’s son who was also co-managing the property. It was a pleasant discussion and I was happy to support them with this new venture of theirs.

The hotel is near a lot of restaurants. I was in a rush and ended up getting a sandwich at the nearby Subway but that was fine given my circumstances. There’s a hip restaurant right next door called Bent, among many other choices nearby.

Perhaps the best part of staying at Urban Living Suites was the price. I found the hotel on a booking website which I suspect is how they get most of their guests. That’s not a bad thing. It’s just an observation given that they are new and not well known.

Who should stay here?

I don’t believe that this hotel is for everyone. Despite its name, I didn’t have a suite in any sense of the word. If you just need a place to stay for the night at an affordable price, this could be a good choice for you. That was precisely my situation and it worked out for me. When I checked out, I was told that I was in the smallest room and that the other rooms had “more to offer” than the one I stayed in.

The lobby was tight and a little chaotic. The hallway and the room itself were clean but a bit dusty. The outside of the hotel could use some updating.

Is it worth staying here?

It depends. Financially, you can get an affordable deal given the location. If you are looking for a more “standard” hotel, this isn’t it. It’s more like staying in a dorm, rooming house or apartment building where you can hear your neighbours though the thin door. This is a very bare minimum type of hotel. It’s like one step above a hostel. It’s a tight fit but if you just need somewhere simple to rest your head and shower, it could be good for you.