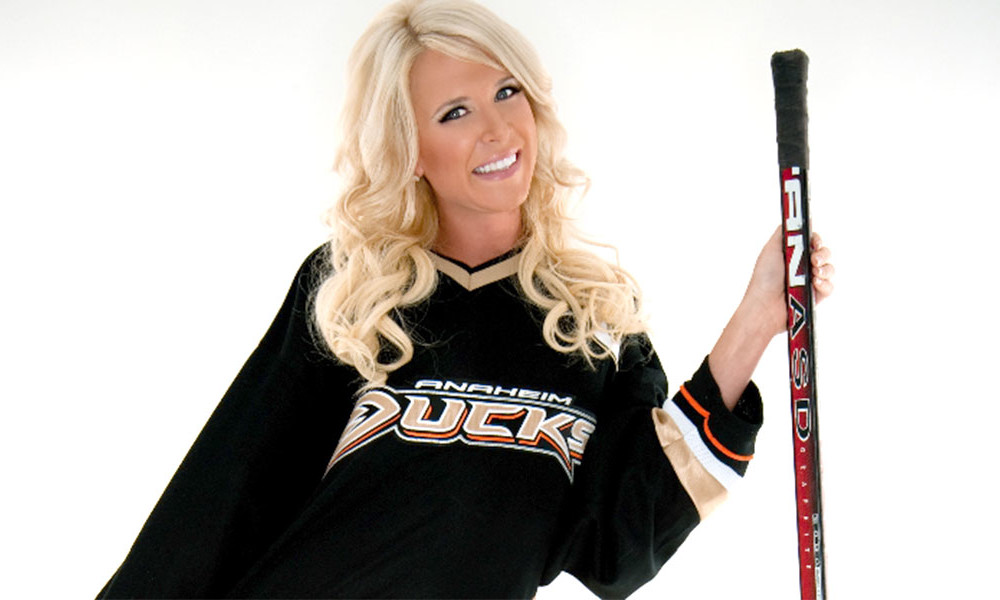 The May 2009 spotlight is on model Amanda Vanderpool! You’ve probably seen her as an Ice Girl Cheerleader for the Anaheim Ducks. Find out what she does at the Playboy Mansion on Sunday afternoons, her sporty history and more! Check her out!

Citynet Magazine: Where are you from/live now?
Amanda Vanderpool: I’m from Orange County, went to Los Alamitos High School then Orange Coast College. Lived in Newport Beach on the peninsula for a few years and now I live in Beverly Hills.

What’s your next hot photoshoot?
At the end of the month I’m doing a Jet-Set editorial on a private gulfstream jet! I’m soo excited! That’s a shoot I’ve wanted to do but also I want to do a really natural shoot with no makeup, wavy hair, at some sort of beach resort in Hawaii!

What’s the deal with Anaheim Ducks?
I grew up watching hockey with my dad. He plays, has coached my brothers teams, then got season tickets to the Ducks so I would go to so many games! The Ducks have ice-girls and I tried out and was on the team for two seasons! I had soo much fun while on the team! The year after I left the team, the Ducks won the Stanley Cup and I was at that game with my dad, step mom, and brother… it was amazing and I’ll never forget that game!

Any hidden talents?
Hmmm… I’m a really good skiier! I think that surprises a lot of people. My dad took me skiing every winter since I was a kid. We usually would go to Whistler, BC in Canada for Christmas through New Years, it was absolutely amazing! I love the mountains 🙂

What do you think is your sexiest body part
Definitely my booty… I get a lot of compliments on it and my legs. [Editor’s note: You can’t argue with that!)]

Vanderpool is an interesting name. What’s your background?
I’m Dutch, German, and Irish.

Favorite place to vacation?
Aspen, Colorado. It is allll it’s cracked up to be! Aspen is the only other place I could literally live year round other than So Cal.

What do you do in your downtime?
I watch a lot of sports, mostly ice hockey (Go Ducks!), spend time with my family, lay out at the pool, go the to playboy mansion on Sundays for Fun in the SUNday, read books (right now I’m into reading all the Malcolm Gladwell books, I finished Outliers, now I’m reading Blink, and then the Tipping Point).

Do you have a story about how you got away with something?
Hmmm….. I think I’ve gotten away with a lot! Especially speeding tickets 🙂

Give us a fun fact about you.
I’m left handed (ok kinda boring).

Best and worst pick-up line used on you?
Best pick-up line was “Do you want to go to Aspen with me?” (That definitely wins me over! Or an invite to a Ducks or Lakers game). Worst pick-up lines are when guys are insecure and kinda insult/joke with you…. sooo lame!

What’s the most common question that people ask you?
What is your workout routine? lol It’s funny because I don’t really work out very often.

How do you stay in shape?
I eat healthy and I go jogging

Name anyone you would love to meet.
Mariah Carey, I’ve been such a fan of hers since I was a little girl 🙂 She has the most beautiful voice and whenever I’m down I can pop in her CD and instantly my spirits are lifted!

Favorite upcoming projects?
I made the LA Temptation for the Lingerie Football League! I’m really excited! We had our first mini camp a couple weeks ago and it kicked my butt! I’m really looking forward to the season kick off in sept! I leave for London on June 13th to work an event for the Royal ascot race that the queen attends! I’m going with 3 other amazing models that I know so its going to be a blast! We’re working a bunch of events in London and then St. Tropez! July 9th I’m starting classes at UCLA for Broadcast Journalism! I’m going to focus on Sports Broadcasting 🙂 Sooo excited!

Where do you see yourself in 5 years?
In 5 years I definitely see myself working as a Sports Broadcaster here in LA!

This is the general account for various contributors to the magazine.

The 4,000 carved pumpkins at Pumpkin Inferno were

Some of Montreal’s most exotic ice cream and mil

@shakercuisineetmixologie has finally come to Mont